Dear Readers, If you have spent any time reading my blog posts you will know I love pictures. I love looking at them, I love taking them too and have been known to stop and offer to take pictures for strangers who are in need of a drive-by photographer. With the selfie stick, that has stopped being necessary as it once was, and I still offer. I am known as a shutterbug to most, if not all of my friends. I have always worn this badge with honor.

With the birth of our daughter, I knew a shift in that philosophy was coming, because while I want to take a picture of her every five minutes, I also don’t want to miss something because I am trying so hard to capture it with the perfect pose, outfit and filter. Case in point, the other night my husband and I were taking pictures at the office Christmas party and where I normally would have said, let’s take it a certain spot and a certain time.. and let’s get pictures with all the people I run into, time was precious, since we had a babysitter at home and a curfew, so in the end, someone took one picture of us at the party and that was enough.

It should be noted, my husband HATES taking pictures and he does so only because he loves me. We had a discussion about this recently, because we had some people visiting Vivienne for the first time and I asked him to take a picture and he said, “Just enjoy the moment, why do you need a picture?” I will admit, at the time I was really vexed that he said that to me and I was getting seriously worked up and ready to fight back with all my very rational, logical reasons for why I wanted a picture but realized he had a point and I breathed in the moment as it was happening and didn’t document it. I have found several opportunities in the last 12 weeks (Vivienne is 12 weeks old today!) to really soak in the moment and not obsess over capturing it. I also think there is a STRONG temptation to only show the good and talk about the good and a lack of reality is pervasive on social media. I am doing my best to show both sides and not just a side but rather that it’s a large and twisted tapestry of things. It’s good and it’s bad. It’s hard and it’s easy and one blog post can’t do justice to the tumult of emotions coursing through me (hello hormones) on a given day. But I digress, back to the moments and the capturing of them.

Last week is a prime example, I took her and the dog and myself to the park, and while I was rolling her around I got a little tired so I sat down, she was smiling at me, as she often does and just as quickly, she giggled. It was so quick that if I hadn’t been paying rapt attention to her (perhaps reaching for my phone?) I might have missed it in the pursuit of capturing it. Just a few minutes ago,  I was rocking her to sleep (hopefully for many hours in dreamland) and she smiled in her sleep, I reached for my phone to take a picture and then I realized… if I take a picture I might wake her up and maybe it’s a better idea to let it happen and just smile back at her, silently and keep that moment unphotographed. Then there are other times when you snap pictures and you capture what I would deem a perfect moment. Such a moment and picture happened last night at the Hannukah party which has become a tradition for our family.

No, I am not Jewish. I am what is known as an honorary Jew. I was given the title lo these many years from someone who admired my work ethic and called me a Jew. I consider this to be a great honor and would never call myself Jewish as that would be incorrect. My dear friend has a gathering every year about this time and we really enjoy taking part in the ritual. This was our first party where we were the only ones with a baby and we were navigating this new reality and Jeremy was trying to calm down our daughter who was just on the edge of fussy, (yes it happens!) and I just happened to see this and in truth, was snapping pictures of the rest of the party and caught this by accident, and I am so glad I did. 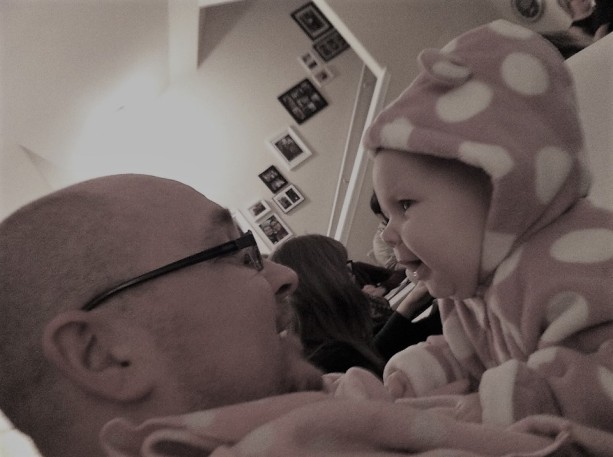 I can’t speak for you, but when I look at this picture, I see all the love he has for her and all the love she has for him. She is focused and paying rapt attention to Daddy. In this instance, I got a “perfect moment” photo but more often than not, I realize they are going to happen when I am NOT holding a camera and I accept that. I think it’s more important than ever to live in the now.. and not miss what’s happening around you because you are thinking about the next thing happening. Live in the now.

What does that mean for you? Taking more pictures or taking less pictures? Maybe it means writing in a journal about the moments you are experiencing, good or bad.

Momentous or Mundane, it’s your life and it’s going by at supersonic speed, it’s your job to slow it down and take “pictures”, sometimes with just your heart.