Have you ever said yes to doing something and immediately regretted it, and wound up resenting the person you said yes to?

You know why? Because you were choosing to please other people instead of adhering to your own boundaries.

Due in large part to my good friend, Jessica Brill

And before her, my mom- Joan Ellen Young

That’s right, it took two people to stamp out the rampant “people pleaser” behavior that I was prone to exhibiting.

In fact, it took even more than that, because each person who I said “no” to was another person who helped me keep my boundaries strong.

I fervently wish I had recorded that first “NO”

Then again, I guess it would be weird to call that person and remind them I said “No” thus defining a boundary.

When we were getting out of debt, my     husband and I got a lot of practice saying no, it’s not in the budget or really just “no”. We also learned a metric ton about the usefulness of a buffer. Like, you always want to have a little extra in your accounts, in case of “the wrath of the whatever from high atop the thing” happens and now you have 50.00 less than you thought, which dovetails nicely back to boundaries, less money, more “no”.

After all, “No.” is a complete sentence. 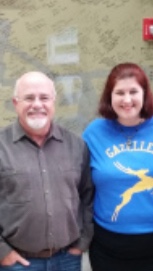 In this holiday season, it’s easy to overcommit yourself and your time, so please, do yourself a favor and set some boundaries and buffers.

Start small, say nothing when someone asks you to do something or go somewhere and really think, Do I want to?

If you are feeling it, go ahead and say, No.

I know it will feel awkward and like you want to add a sorry, but don’t.

Also, build in a few self-boundaries or buffers for yourself while you are at it.

For example, if you know something is due by 4pm, if you can have it done by 3:00, why not design your day to get it done early? I get there will be times that you can’t build in a buffer, but when you can, do it.

“Between buffers and boundaries, you will find a great deal of inner peace” Professor Haston

And then, SAY NO.